Crowdsourced data: Smart Objects and the Power of the Crowd

According to the Oxford English Dictionary (OED) “crowdsourced” is a relatively new word, its first recorded use being as recent as 2005. So, it is ironic that the compilation of the OED is itself one of the most impressive crowdsourcing projects in history.

In 1857, the British Philological Society appealed to the public to send in the earliest quotations that they could find of a word’s usage on small slips of paper. By 1884, James Murray, the OED’s editor had to have a large shed built in his garden, with storage space for the ever-increasing number of slips being sent to him from all over the world. Anything addressed to ‘Mr Murray, Oxford’ would always find its way to him and he sent out so much post that the Post Office erected a special post box for him outside his house, which can still be seen at 78, Banbury Road. Such was the volume and quality of the data that was provided to Murray by the public that the first OED was not fully complete until 1928. Which, sadly, was 13 years after Murray’s death. 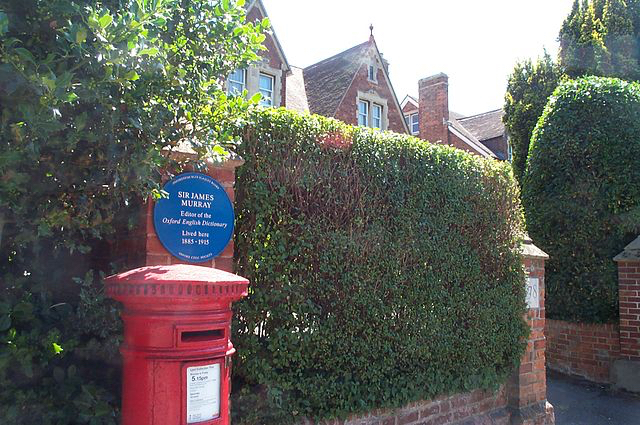 Nearly 90 years later, we now have technologies that Sir James Murray could not have dreamed of but the crowdsourcing technique that he pioneered is still very much part of our lives. What’s more, Oxford could be one of the cities to benefit from it most.

It is a little known fact that Oxford already has a network of 100,000 highly sophisticated sensors that autonomously navigate their way around the city, 24/7, sharing data with each other and uploading straight to the cloud through 4G and Wi-Fi. Every faulty street lamp, pot hole and overflowing waste bin in the city is detected by these autonomous sensors almost as soon as faults occur but these are not drones from an IoT future, they are the 100,000 smartphones that are in the hands of Oxford’s active citizens. The question is, how should we ensure that we gather this wealth of sensory data in a way that engages the citizen and gives the city actionable data that will improve the life of those citizens.

For RedBite, our whole concept of the IoT and Smart Objects rests on the simple fact that it enables people to interact with objects. The humble QR code, linking an object directly to the cloud immediately makes that object Smart through its ability to communicate with people. However, if we are to draw upon all that accumulated knowledge, we must power the imaginations of people – just as James Murray did – in order to get them to share.

From our experience of making objects Smart, we can see 4 rules that will make people want to share what they see and hear about the objects around them. To engage people, the solution must be:

Smartphones, tablets, QR codes, NFC tags and social media apps are robust, low-cost, highly scalable technologies that are already a key part of people’s lives. This means that community engagement is likely to build momentum sooner, thanks to the convenience and ubiquity of such technologies.

If city assets (anything from streets to library books) bore a QR code, we could link every one of those assets to its own unique URL. In effect literally everything can have a social media profile page onto which anyone with a smart device can add comments and share data including photographs and attachments.

Although this provides citizens with a convenient method of contributing data, it does not give them a reason why they should.

At the University of Cambridge’s Institute for Manufacturing (IfM), much of the equipment that the staff and students use on a daily basis has been made Smart and interactive by the use of RedBite’s solution, RedBite Asset.

Everything from complex equipment like robots and 3-D printers to first aid boxes now have a discrete QR code which, when scanned, takes the user to a page where they can read instructions, ask for help and see comments left by previous users. So, the staff and students use the system because it gives them access to useful information as well as the ability to contribute information. RedBite Asset gives the IfM’s management and maintenance teams knowledge of when faults occur and when services should be scheduled.

Like crowdsourcing, “gamification” is a newcomer to the language. According to the OED it is this “the application of typical elements of game playing to other areas of activity, typically as an online technique to encourage engagement with a product or service”. In other words, it is possible to get people to engage with something that they perhaps normally wouldn’t engage with, if you create a sense of fun around the activity.

This has already been applied in a smart city context through the Hello Lamp Post project, again using the power of the mobile device and the results were very impressive. In the summer of 2013, people all over Bristol could be seen sending and receiving SMS messages to everyday city objects like postboxes. Why? Because the postboxes and lampposts answered them with questions and stories about the other Bristolians that they had talked to earlier!

As well as encouraging citizens to engage initially with Smart Objects, an emphasis must be placed on continued engagement. There is a risk that the somewhat novelty appeal may not be enough to ensure continued interaction with Smart Objects. To overcome this, cities must ensure that active citizens feel a sense of engagement in the process of running the city on a daily basis. Perhaps citizens could be thanked for their contributions, kept updated on progress, or made aware of the value that reports such as theirs has to the city in financial and social terms.

Above all, community engagement must be deemed worthwhile by citizens in order for them to interact with these objects. Results deemed worthwhile are likely to differ from person to person. However, seeing how local authorities are using this data to provide improved services is likely to be appreciated by all active citizens, thus encouraging sustained engagement.

The benefit for the city itself can also be huge. RedBite Asset can be used to maximise the efficiency of city maintenance teams by turning the crowdsourced data into action plans for city workers. Every day, they will see on their smartphones a list of assets to be worked upon chronologically and by proximity. By utilising crowdsourced data, we have the power to revolutionise the data we have access to, the way we capture data and how we can use this data to benefit citizens.

Perhaps if James Murray had had access to the types of technologies we have today, the OED may have been published far more rapidly and without the need for him to build a new shed to store all of the collected data in!