Interoperability and the Internet of Things

The Internet is arguably the most significant technological and social development in human history. By connecting people the world over, it has transformed our societies in innumerable ways.

While Internet access increases in ubiquity via our smart phones, cars and homes, we start to see the benefits of broadening the Internet’s scope into novel markets. The ‘Internet of Things’ (IoT) seeks to extend the Internet’s reach to facilitate communication and decision making between things and the people that use them. This endeavour requires a large investment of technological, political and imaginative effort.

In previous Insights posts we have explored the origin of the Internet of Things, what the IoT is and is not and have also examined various Auto-ID technologies that allow for the communication between things, processes and people. Here we will examine the integral requirement of the IoT to become an interoperable reality in order to achieve maximum benefit.

The Importance of Interoperability

As a network of networks, the Internet identified solid interoperability as a key architectural component from the out-set, as this quote from the Internet Engineering Task force in 1989 shows:

“The System must tolerate wide network variation. […] Some vendors have fielded host implementations that are adequate for a simple LAN environment, but work badly for general interoperation. […] However, isolated LANs seldom stay isolated for long; they are soon gatewayed to each other, to organization-wide Internets, and eventually to the global Internet system. In the end, neither the customer nor the vendor is served by incomplete or substandard Internet host software”.

Without this commitment to openness, our efforts towards creating the IoT have, so far, created multiple disparate silos of information. A true IoT is a single entity comprised of multiple sub-systems. However, there are major challenges to such unification.

Humans have had millennia to develop our own interoperability mechanisms, such as language and our interfaces to tools. However, if we require humans to facilitate communication between our things the system will neither be reactive, robust nor scalable.

By creating a common language and a common interface, the HyperCat consortium seeks to address these problems.

Currently at version 1.1, HyperCat is a simple, open specification, which describes a catalogue of resources and mechanisms for retrieving and searching the catalogue for relevant data.

The catalogue and resources are both annotated with meta data, allowing a non-human to automatically understand the data within. For example, a program can browse a HyperCat and discover what formats its resources are presented in and which of those have temperature data the program can utilise.

By building on existing Internet technologies and ensuring that the HyperCat does not limit implementations, it is easy to adopt.

Over the next year, the consortium is developing a multitude of demonstrators, showcasing the version 2.0 specification, which will be ratified by the BSI from April 2016.

RedBite is a member of the HyperCat consortium, leading two HyperCat demonstrators, Smart Facilities and Smart Highways and contributing to the 2.0 specification in several ways. 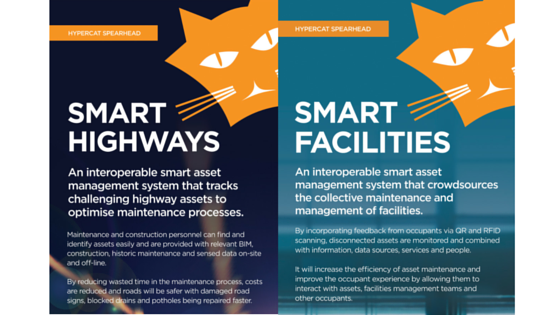 Allowing assets to communicate with us, with each other and with our existing and future computer systems is at the heart of RedBite’s methodology. Through RedBite Asset and technologies such as HyperCat, we seek to include all our things in the Internet of Things revolution. Working with our partners in facilities management and construction (highways), we will be interoperating with BIM data, sensors, computer systems and people to demonstrate the real and attainable business benefits of giving assets an accessible Internet presence.