What is the Internet of Things? and What is it Not?

In our first Insights article on the Origin of the Internet of Things (IoT), Prof McFarlane posed a question about whether Kevin Ashton’s vision of the IoT has in fact shrunk over the years. One would be naturally puzzled by this question given that the IoT has been gaining tremendous momentum over the last few years with a huge variety of applications, prototypes and speculative use cases, spanning across multiple consumer and industry sectors.

What is the Internet of Things? The vision of the IoT was initially borne out of the idea of tracking every single object in the world uniquely using Radio Frequency Identification (RFID). The overriding business case at that time was to have an automated way of tracking objects without the need to use barcodes to manually scan every single item one-by-one. This was primarily to ensure accurate and timely inventory position at various points of the supply chain, but it came with the crucial (often under-appreciated) advantage of being able to retain and update information about those objects uniquely. 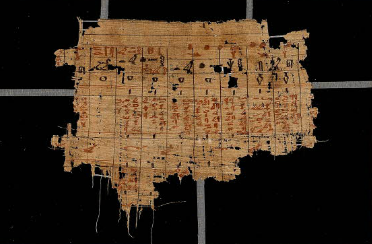 Inventory Lists from the Temple of Abusir, c2460 BC (copyright Musée du Louvre).

The need to track and manage objects uniquely has been present for many thousands of years as evidenced from the papyrus shown to the right.

The archives shown at The Louvre were the first example of an inventory list using “pen and paper” (and possibly the first primitive Excel spreadsheet UX design!). The papyrus was used to record asset details including financial information, asset condition and whether the asset was still present in future inspections. Fast forward about 4500 years, the technology for object tracking had until recently, fundamentally, not changed at all.

With the advent of computer systems, it is only in the past 50 years or so that the barcode technology, along with Excel spreadsheets, revolutionised the way in which inventory assets were tracked. Information written on paper finally “leaped” into the virtual world and items were no longer identified visually but by machines – somewhat eliminating the need for human interaction and allowing unlimited copies of digitised records to be edited, shared and backed up. This first leap in technology was very primitive by today’s standards, however, it rapidly evolved over the years enabling assets’ information to be sent via emails and stored on sophisticated Enterprise Resource Planning (ERP) applications – albeit predominantly desktop applications that were yet to take full advantage of the Internet. 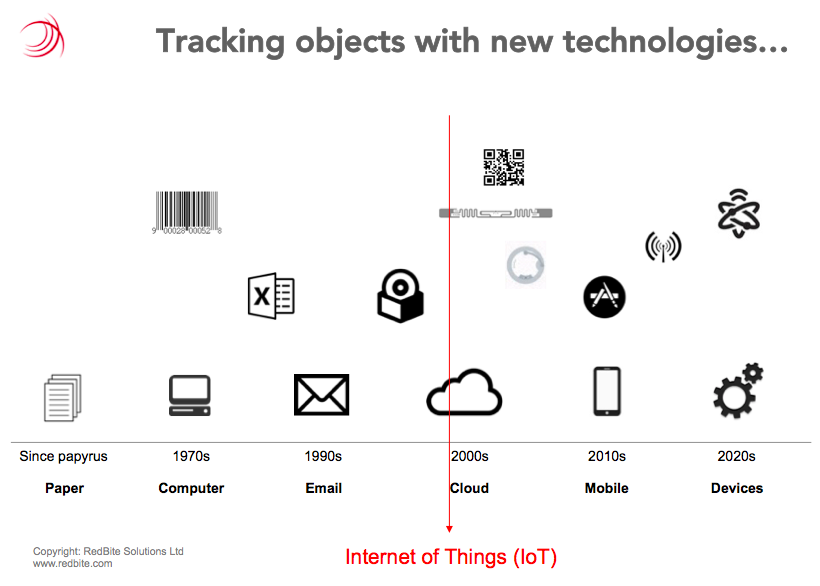 The latest wave of technological evolution is undoubtedly the IoT. The original vision of IoT was conceived in around 1999 when Kevin Ashton and the original Auto-ID Centre team, including Prof McFarlane, envisioned the idea of a cheap RFID tag (consisting of just the unique identifier) on a physical object, with all other object information residing on the Internet. As the Internet scales beyond intranet of enterprise computers to the “cloud” and subsequently accessible via mobile devices, so was the sophistication of Auto-ID technologies which have evolved from barcode to RFID, QR, NFC, BLE tags and device-to-cloud communication.

Nowadays, the Internet-of-Things (IoT) has been explicitly or implicitly defined as connecting things with embedded processors to the Internet. A huge focus has been put on the connected devices rather than the thing itself. At RedBite, we envisage an IoT world that is not just limited to the:

For us, the IoT is not just a better smoke alarm or a better thermostat that can be connected to the Internet. Nor is it just a better motion sensor, humidity sensor or webcam that is accessible from the cloud and it is definitely not just an “intranet” of things that is not shareable with the outside world. Although these definitions of the IoT are not technically wrong, we believe that the Internet of Things is much, much more than that. Sixteen years after coining the term, Kevin Ashton revealed to the BBC earlier this year that he now wishes he had phrased the IoT as the “Internet for Things”.

Kevin Ashton, the originator of the term “Internet of Things”, revealed to the BBC in May 2015 that he now wishes he had phrased the IoT as the “Internet for Things”.

This is an inspiring term for us at RedBite as it refocuses the emphasis on things – things that have real utility to users – and the role of the Internet to enhance the utility of such things. After peeling away all the layers that have been added to the IoT over the years, this for us is the very essence of the IoT.

At RedBite, we are building a world where all things can be enhanced using the Internet, with or without any onboard processing power, simply by applying the right Auto-ID technology to identify and track the object throughout its whole lifecycle. RedBite effectively turns every connected or disconnected object into a Smart Object, enabling them to retain and share their data, as well as making intelligent decisions about themselves. We embrace the original vision of IoT in its totality and boundless capacity.

_
Every object tells a story, we let them speak.